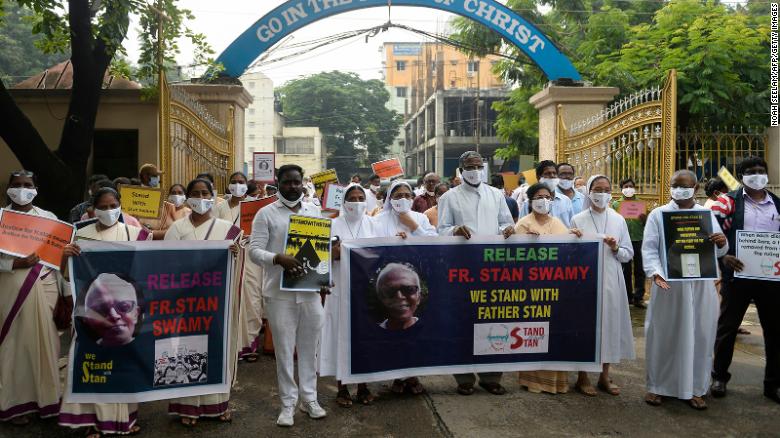 New Delhi (CNN)The death in India of an octogenarian human rights activist who was denied bail even as his health deteriorated in prison has sparked anger across the country, with critics decrying the government’s alleged misuse of anti-terrorism laws.

Jesuit priest Stan Swamy died age 84 on Monday at the Holy Family Hospital in a Mumbai suburb after suffering cardiac arrest, his doctor told the Bombay High Court later that day. The court was hearing an urgent plea for bail on medical grounds, which Swamy was earlier denied in March.
Swamy was living with Parkinson’s Disease and had recently contracted Covid-19 in prison. At a hearing for his bail application in May, the court noted Swamy had a “severe hearing problem” and was “physically very weak.”
For decades, he fought for the human rights of India’s marginalized and indigenous groups, speaking and writing in depth about caste-based injustices.
India’s caste system was officially abolished in 1950, but the 2,000-year-old social hierarchy imposed on people by birth still exists in many aspects of life. The caste system categorizes Hindus at birth, defining their place in society, what jobs they can do and who they can marry.
In October last year, Swamy was arrested and charged under the country’s anti-terrorism laws, which critics have described as draconian.
Please read: