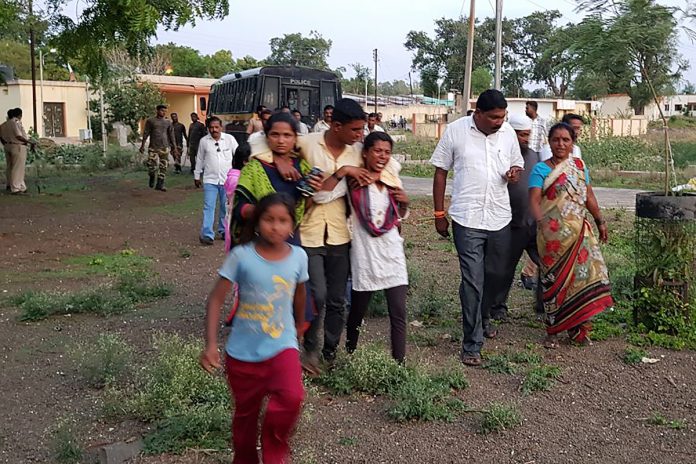 This photo taken on July 1, 2018 shows Indian women whose relatives were murdered in a lynching incident being led away from the crime scene area by villagers in Dhule district, some 330 kilometres (205 miles) from Mumbai. Indian police said July 2 they have arrested 23 people after five men were bludgeoned to death by a crazed mob in yet another horrific lynching to rock the country. (AFP photo)

As many as nine states witnessed increased incidents of communal violence this year compared to last year in India, revealed intelligence agencies last week.
Uttar Pradesh state topped the list with 457 communal cases in 2019 between Jan. 1 and Oct. 30, as compared to 396 incidents the previous year during the same period.
Rajasthan with 165 incidents this year, compared to 116 communal incidents last year was second, followed by West Bengal with 79 incidents as compared to 57 last year.
Then it was Gujarat with 40 cases against 26 last year, followed by Assam with 20 communal incidents against 17 cases last year. Other states were Kerala, Tripura, Delhi and Odisha with five incidents against none last year.
In the wake of the reports of communal violence, independent policymakers, social activists and church leaders called on the government to curb the menace.
“The figures put out by the National Crime Records Bureau (NCRB) indicate a widespread deterioration of law and order in most parts of the country. Significantly, the nine states are those where the ruling pro-Hindu nationalist parties including Bharatiya Janata Party (BJP) are strong,” Cynthia Stephen, independent researcher and social policy analyst, told UCA News.