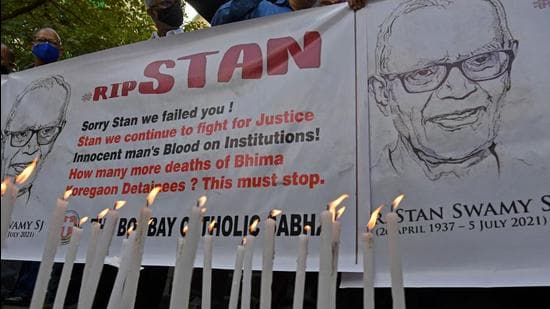 Stan Swamy was arrested by the National Investigation Agency (NIA) in a raid at his non-governmental organisation Bagaicha, on the outskirts of Ranchi, on October 9 last year
By HT Correspondent

UN human rights chief Michelle Bachelet and human rights officials of the US and European Union (EU) have expressed concern at the death of octogenarian Jesuit priest Stan Swamy, with some of them even saying that he had been imprisoned on “false” terrorism charges.

The external affairs ministry responded to the criticism on Tuesday by saying “due process under law” was followed in Swamy’s case, and that India remains committed to promoting and protecting the human rights of all citizens.

The UN high commissioner for human rights and other United Nations independent experts had repeatedly raised the cases of Swamy and 15 other human rights defenders associated with the Bhima Koregaon case with the Indian government over the past three years and sought their release from pre-trial detention,Bachelet’s spokesperson for Liz Throssell said.

“In light of the continued, severe impact of the Covid-19 pandemic, it is even more urgent that States, including India, release every person detained without a sufficient legal basis, including those detained simply for expressing critical or dissenting views,” the spokesperson said in a statement.

“We stress, once again, the high commissioner’s call on the Government of India to ensure that no one is detained for exercising their fundamental rights to freedom of expression, of peaceful assembly and of association,” Throssell said.

Swamy, 84, died in a Mumbai hospital on Monday. He was arrested by the National Investigation Agency (NIA) in a raid at his non-governmental organisation Bagaicha, on the outskirts of Ranchi, on October 9 last year and charged with being a member of the banned Communist Party of India-Maoist and involvement in a conspiracy to instigate caste violence in Bhima Koregaon village near Pune in 2018. Swamy denied the charges.

In its response, the external affairs ministry said Swamy was arrested and detained by NIA “following due process under law”, and his bail applications were rejected by courts because of the “specific nature of charges against him”. Authorities “act against violations of law and not against legitimate exercise of rights”, and all such “actions are strictly in accordance with the law”, the ministry said.

In view of Swamy’s poor health, Bombay high court allowed his treatment at a private hospital, where he received “all possible medical attention” since May 28. His health and treatment were closely monitored by courts, the ministry added.

“India’s democratic and constitutional polity is complemented by an independent judiciary, a range of national and state level human rights commissions that monitor violations, a free media and a vibrant and vocal civil society. India remains committed to promotion and protection of human rights of all its citizens,” the ministry added.

Both Mary Lawlor, the UN special rapporteur on human rights defenders, and Nadine Maenza, chair of the US Commission on International Religious Freedom (USCIRF), contended that Swamy had been held on “false” charges of terrorism. They were joined by Eamon Gilmore, the EU special representative for human rights, in expressing concern at Swamy’s death.

There was no immediate response from Indian officials to the criticism by the UN, US and EU officials.

The statement from the UN human rights chief said: “We are deeply saddened and disturbed by the death of 84-year-old Father Stan Swamy, a human rights defender and Jesuit priest, in Mumbai yesterday, following his arrest in October 2020 under India’s Unlawful Activities (Prevention) Act (UAPA).”

It noted that Swamy had been held in pre-trial detention without bail since his arrest and charged with terror-related offences in relation to demonstrations dating back to 2018.

“He was a long-standing activist, particularly on the rights of indigenous peoples and other marginalised groups. While in Mumbai’s Taloja Central Jail, his health deteriorated and he reportedly contracted Covid-19. His repeated applications for bail were rejected. He died as the Bombay high court was considering an appeal against the rejection of his bail application,” the statement added.

Bachelet has also raised concerns over the use of UAPA in relation to human rights defenders, a law Swamy had challenged in Indian courts days before he died.

Lawlor expressed concern at Swamy’s death in a tweet, saying: “The news from #India today is devastating. Human Rights Defender & Jesuit priest Fr Stan Swamy has died in custody, nine months after his arrest on false charges of terrorism. Jailing HRDs is inexcusable.”

Gilmore tweeted, “India: I am very saddened to hear that Fr #StanSwamy has passed away. A defender of indigenous peoples’ rights. He was held in detention for the past 9 months. The EU had been raising his case repeatedly with authorities.”

Maenza too raised the issue of Swamy’s death on Twitter, saying: “Heartbreaking: death of Indian prisoner Father Stan Swamy after he got COVID. He was elderly priest & human rights activist imprisoned on false terrorism charges. @USCIRF spoke out against his arrest & when he was denied bail as his health deteriorated.”